Kuwait’s emir, Sheikh Sabah Al Ahmad Al Jaber Al Sabah, who ruled over his oil-rich country since 2006 and had been its foreign minister for 40 years, including during Saddam Hussein’s invasion, has died. He was 91.

He is expected to be succeeded by his 83-year-old half-brother, Crown Prince Sheikh Nawaf Al Ahmad Al Sabah.

“With great sadness and sorrow, we mourn to the Kuwaiti people, the Arab and Islamic nations, and the friendly peoples of the world, the death of the late His Highness Sheikh Sabah Al-Ahmad Al-Jaber Al-Sabah, Emir of the State of Kuwait who moved next to his Lord,” the royal palace said in a statement, according to state media. Tuesday’s announcement didn’t say when he died or where.

Kuwait, a country of 4.2 million people, is a strategically located country wedged between Saudi Arabia and Iraq at the mouth of the oil-rich Gulf. It has one of the world’s largest oil reserves.

Sheikh Sabah underwent surgery in July 2020 for an unspecified medical problem and was flown to the United States for further treatment. Before doing so, he temporarily handed over some of his responsibilities to the crown prince, the state-run KUNA news agency said.

The sheikh had canceled a visit in early September 2019 with President Donald Trump at the White House after being hospitalized in the U.S., according to KUNA. This followed an unspecified health “setback” in August. 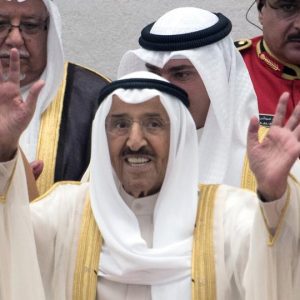 “The president wishes his friend, the Emir, a speedy recovery and looks forward to welcoming him back to Washington as soon as he is feeling better,” the White House said in a statement at the time. “The Emir is a well-respected leader and has been a tremendous partner of the United States in tackling challenges in the region.”

On Aug. 18, Kuwait acknowledged the emir had suffered a medical “setback.” That announcement came after Iranian Foreign Minister Mohammad Javad Zarif visited the emir and wrote on Twitter that he was “praying for emir’s speedy recovery,” without elaborating.

The sheikh was the 15th ruler in the Al Sabah dynasty, which dates to 1752, and was the fifth emir since Kuwait gained independence from Britain in 1961. Sheikh Sabah served as foreign minister from 1963 until 2003.

In August 1990, Saddam’s Iraq invaded its strategically located southern neighbor, deposed the emir — Sheikh Jaber Al Ahmad Al Sabah — and annexed Kuwait. Sheikh Jaber fled to Saudi Arabia and set up a government in exile. The Sabahs returned to Kuwait in March 1991, two weeks after the end of the U.S.-led Operation Desert Storm.

Sheikh Sabah worked to resolve regional issues through diplomacy, including the unresolved Saudi-led boycott of Qatar, and was host of donor conferences for Iraq, Syria and other war-torn countries.

Supergrass’ original pop spirit, no matter how daft it gets.

All adult life is here; wry, terrifying, frustrating and drunk.

It's not about some skirt-chasing gadabout but a sweet pastor.

Trump has ‘not been such an honest broker’ on Palestinian statehood, Saudi prince says