To foreign observers, this may seem like an act of self-sabotage from an inept politician. Here in the UK, it is understood as the surrender of a man who has run out of options.

Theresa May now holds all the cards in British politics. To those who noted the authoritarian language of her statement on Tuesday, in which she publicly called for a new election, the latest extension of her near-total power has become a cause for serious concern.
Unlike the US, Britain does not traditionally have fixed term limits for its political representatives. The law requires that the British Parliament must be dissolved every five years maximum and new elections held.

However, until recently, there has been no minimum time-period for a Parliament. As per the unwritten understandings that define our constitutional monarchy, only the monarch can appoint a date for new elections — in practice, she always does so when a Prime Minister requests it.

This all changed in 2011. The coalition government between the Conservative and Liberal Democrats was unprecedented, so it required an unprecedented constitutional framework. To reassure his junior partners that they would get a full five-year term in power — and that the Conservatives wouldn’t try to ditch them if they outstripped them in the polls midterm — then-Prime Minister David Cameron agreed to pass the Fixed Term Parliaments Act, stipulating that Parliaments should last no more nor less than five years.

The Act’s provisions can be bypassed if a two-thirds majority of the House of Commons agrees to the prime minister’s call for an early election. It was a temporary answer to historic necessity.

The British people have a long, entrenched understanding that the prime minister of the United Kingdom holds the prerogative to choose the date of the next election. Within the ruling parliamentary party, calling an early election is always a defining moment of leadership: it is often a calculated risk in the hope of increasing a parliamentary majority. But this Act is now a blip that prime ministers have to work within.

Thus, Theresa May effectively issued a challenge to the leaders of other parliamentary parties: Join me in voting for an election and give yourself a chance to take your manifesto to the people, or block this election and be known as a coward.

Ironically, the lower Corbyn sinks in the polls, the more any attempt to avoid an election would look like fear. Nothing is more shameful than a politician who’s scared to ask the electorate what it thinks.
So effectively, a British prime minister can still call an election whenever he or she likes. And having proved the Fixed Term Parliaments Act obsolete, it’s likely that Theresa May will abolish it altogether during the next Parliament, assuming she is still in charge.

The chances that anyone else will have replaced her as Prime Minister are remote: Jeremy Corbyn now trails her by around 20 points in most opinion polls. That, of course, is why she has called this election now. She’s cashing in at the top of her political valuation: many predict that the Labour Party will be near destroyed as a political force on June 8.

May has framed this election as a re-endorsement of her strategy for negotiating Britain’s exit from the European Union (although you’d be hard pressed to find anyone in Britain who can tell you exactly what that is).

She’ll have a hard time finding a clear enemy: only the tiny Liberal Democrat party, left with nine seats after the collapse of the Coalition, have committed to blocking Brexit altogether. The Labour Party is divided on the issue, with Jeremy Corbyn himself a Eurosceptic.

But in Tuesday’s statement, she reiterated that the British people had voted firmly to leave the EU. “On the issue of Brexit, the country is coming together but Westminster is not,” May said. Her speech drew a picture of united, Eurosceptic citizens backing their leader whilst a cabal of Westminster elites does its best to undermine the national will. 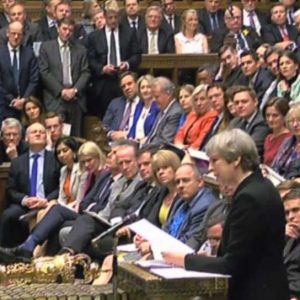 This is a common tactic of authoritarian leaders: depict any opposition as anti-patriotic, a fifth column working to undermine the will of the people. Those in Britain most committed to an extreme break with the EU have pushed this line for some time. After the High Court ruled that a parliamentary vote would be required to enforce the referendum result, another recent Daily Mail front page pictured each of the judges involved, under the headline: ENEMIES OF THE PEOPLE.

And today in Parliament, May told the people exactly what to do to stop these enemies: “Every vote for the Conservatives will make it harder for those who want to stop me from getting the job done … Every vote for the Conservatives will make me stronger when I negotiate for Britain with the EU.” In Britain, we are not used to voting in order to affirm a political strongman.

Theresa May is not a pseudo-democratic dictator in the mode of Turkey’s Recep Tayyip Erdogan or Hungary’s Viktor Orban, both of whom used initial election victories to facilitate a one-party takeover of state machinery. Yet there were hints of Europe’s new authoritarianism everywhere in her speeches on the steps of Downing Street on Tuesday and in the House of Commons today.

“Division in Westminster will risk our ability to make a success of Brexit and it will cause damaging uncertainty and instability to the country.” Was she suggesting that Britain’s House of Commons — the home of civil debate — should be defined instead by agreement?
Theresa May is now powerful enough to shame Jeremy Corbyn into signing his own death warrant. But she should not be allowed to shame critics of her Brexit strategy into national vow of silence.